The sanctimommies of generations past would crucify me, but I have had a rough time making the decision to stop having babies. “You have no idea”, they would say, “how #blessed you are to have reproductive choices”. Women have not had this kind of control (or the resulting anxiety) for long. It is a sort of non-problem, like having trouble breaking your $100 bill, being too tall and skinny for pants, or a slow wi-fi connection at a coffee shop.

I thought I wanted three: my mental picture was Kevin, me, and our three little humans. Along the way life changed the vision to two. It’s not a question of being able to handle three kids – I am CERTAIN I can NOT. I can barely raise my two. Nor or am I attached to a family of five. If anything, that provides some downfalls: kids outnumber adults, three would be harder to divide and conquer, two of the three kids would have to share a bedroom, cupcakes and hot dog buns almost always come in even numbers. Less than ideal.

I don’t worry about missing out on a third baby (or toddler), but a third grown kid. It may be an urban myth, but I have heard that elderly people most regret not having bigger families. In my future, I envision lots of adult kids who come home, with their own families, for dinners, who take life’s ups and downs together, who support each other even when they fail to see eye-to-eye. I picture my grandchildren, raised together as closely as my cousins and I were. In my sunset years I want enough kids to care for me – when I inevitably crumble from taking care of them.

I want to be the family in Parenthood.

If only I could envision a picture of life and then paint it in an exact match. The unromantic truth is that practicality, and the unplanned, change the picture. This is what happened to us when we, exhaustively, weighed all the factors. We came up 0-3 on the biggies: money, age, and career disruptions. The thought of another pregnancy is also a true nightmare for me (Kevin too). We have no shortage of love, but some of patience.

Of course, my husband and I have always seen this in the same light, with no conflicts, and the decision was a cinch since we agree on everything.

Would I throw all rational reason out the window to have a third? Some days. Would I throw myself out the window to escape the two? Some days. But I’m relieved the decision has been made. We are fortunate to live in a time of so many choices, and to know I even could naturally conceive, carry, and give birth to another baby. Will I regret the call we’ve made? Maybe. I reserve the right to blame Kevin (even though he is clearly the only one in his right mind) if I ever do.

We feel complete together, the four of us, with one little girl and one little boy. And although they have me swimming upstream all the time, my head barely above water, the two kids we are #blessed to have, are perfectly wild and ours. 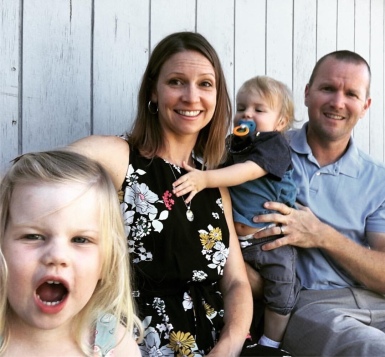 One thought on “No More Babies”