“Cute smile. How old is he?” asks the woman behind me in line at Target. “One” I say, because I can’t bear to say twenty-three months or, worse yet, almost two.

But he clearly is: twenty-three months, almost two. His cheeks are getting less chubby. His size 2T pants no longer need to be rolled. He clears his own dishes, buckles himself into his booster and car seats. He chats in two and three word sentences. When I kiss him, he’s just as likely to say “no Mommy, stop it” and duck his head, as he is to kiss me back. When we read together, there’s a 50 percent chance he’ll insist on holding the book, saying “self”. And yet, he still pumps his hands in the air for Sesame Street or bubbles. When overwhelmed by big feelings, he still wants me to hold him and sing “Kookaburra”. He hovers on the line between independence and babyhood, grasping for both sides.

It happens gradually, unnoticed, and then in bursts. The mastering of skills: hitting the tee ball, building with Legos, dressing himself. The language bursts: questions (“Daddy is?), details (“right here”), and opinions (“no no haircut”). The lengthening and strengthening of limbs and muscles.

A few times a week, he gets his energy out at toddler gymnastics (“nastics”), an unstructured, mommy-and-me class in which 1-3 year olds race around the gym like wild heathen. A favorite activity for both of my kids, I barely remember a time when I didn’t trudge around the gym after them, yawning, pregnant or with another baby in the carrier. The moms and kids around me have changed, sometimes cycled back through with their next babies in tow, but I have been there, chasing kids, for a little over two years now. 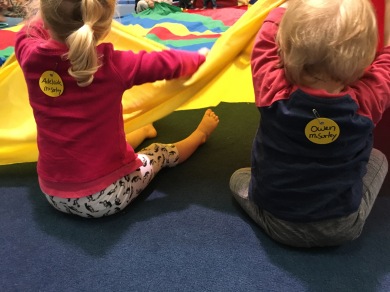 Addie and Owen have always prioritized different activities. She went crazy for the bars and rings. She lived for “parachute time”, sitting engaged in a circle with her buddies, next to (or on the lap of) her favorite coach. She sang the songs and did the stretches – tucking her legs to her chest and then hammering her knees and toes straight. She still sometimes practices at home, as the coach of her stuffed animals. 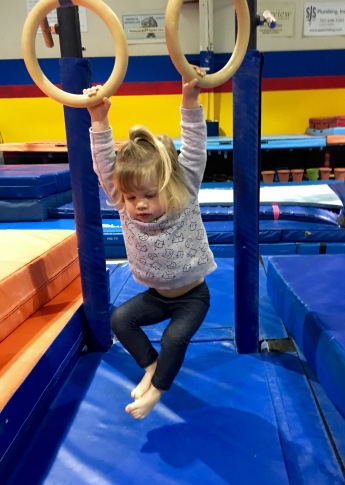 Owen has never warmed up to the coaches. The rings and parachute don’t hold his interest. His primary activity is roaming across obstacle courses of mats and ramps. His face lights up as he jumps off of blocks or gets air on the big trampoline (Addie was never able to wait her turn for that, or jump with both feet). He also exhibits feats of strength, carrying the weighted balls (“heavy”) to the mini basketball hoop and pushing the ramps around.

This morning though, at twenty-three months, almost two, he was a new beast – a master of gymnastics. He took off his own shoes and socks to get ready (an exercise for which I rarely have time and patience – poor second kid) and put them in a cubby by the door. He bounced on his toes by the entrance with the other toddlers, nametags on, eagerly waiting to be unleashed. When the coach let the wild animals in, he raced to the front of the pack.

Instead of saying “hand”, demanding that I explore with him, he was halfway across the gym before he looked back and flashed me a grin of pure joy. He joined a group of boys, chucking beanbags and racing up the ramps to big blocks, leaping off, never fazed by the falls. He fearlessly swung across the (toddler sized) zipline. When the Disney radio pumping through the speakers stopped, and the bell rang for parachute time, he required no coaxing to participate. Today he leveled up in toddler gymnastics.

It all goes this way: too slowly and then suddenly too fast. Checking the calendar and checking him out in action, he is officially twenty-three months, almost two. But in his mama’s eyes, he is still ONE for another twenty-three days 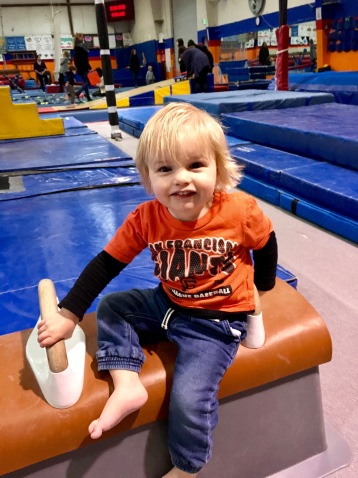