When it’s pancake breakfast day at the 4 year old’s preschool, there is no getting around taking the 2 year old out for a pancake breakfast of his own. And who am I really kidding: I am not one to turn down second breakfast (or any other meal). So along with the hullabaloo of Addie going to school in pajamas, with her teddy bear, to eat pancakes with her school friends, Owen and I had to plan our own brunch date.

It was the last thing they both talked about the night before, and the first thing that morning. While the excitement was not quite enough to curb the getting ready for the day fussfest, it eased it a bit. After Addie was settled at school, Owen and I started off on our morning: soccer, pancakes, and then a run to Trader Joe’s.

It was all talk of pancakes for the first hour or so, and airplanes, since our favorite breakfast spot (Two Niner Diner) is by the airport. Somehwere along the way, the Trader Joe’s stop began to compete for his enthusiasm. Over SOCCER and PANCAKES.

His reasoning: “It’s my turn.” With the boss big sis at school, it was finally his turn to push the pint-sized, kids’ shopping cart. It sums up his whole attitude about this phase of daily life; it’s Owen’s turn. These days are (finally and temporarily) the days of Owen and Mama. And they are amazing.

My little shadow runs rights along next to me as we get things done, sits with a little hand on my leg at doctor’s appointments, helps with Penny Dog at the vet, and thanks me for taking him to the library for toddler story time. When he wakes from nap he runs out of his room to be greeted by me and only me. We take all the time we want to snuggle, build block towers, read books, and talk. I honestly don’t know which of us is enjoying it more. He is fully embracing the attention and freedom, while I am luxuriating in this one and only chunk of time with just one kid (basically a vacation).

Every moment is beautiful and magical … except the ones that are not at all.

At two and a half, Owen now spends large amounts of the day throwing himself screaming to the ground. He whines a lot. I mean, a lot. He pushes, hits, and throws things. He protests, and insists on independence in the most inconvenient of times. Some days I drown in a barrage of needs, inconsolable moods, and tantrums.

Some of his meltdowns, so far from anything rational, are surely a joke – a parody of himself. We decide one day on a lunch stop for bagels (I seriously never turn down food), and he asks, “is there milk at bagel shop?” My answer, while seemingly reasonable, was clearly not. “Yeah, I’m pretty sure I’ve seen milk there, bud.”

He catches and clings to the tiny, semantic, implication in that “pretty sure”. “I want milk with bagel! Bagel shop don’t have milks!!!” Throughout the entire drive across town he wails, mourning the milk that he has convinced himself he will not get. No matter how many times I reassure him that they will have it, he can’t let it go.

When we get to the bagel shop, of course, there is milk, but the little stinker steals my orange juice instead. His big feelings of grief are suddenly replaced by joy and mischief. 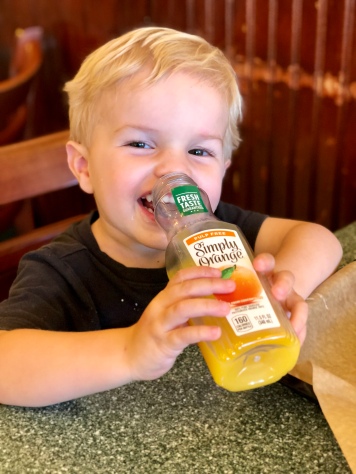 As taxing as it all is, I’m glad to have this one on one time to help him through the perils of being two. I can protect our future emotional selves by getting down to his level, helping him name his big feelings, offering some empathy, and taking as long as he needs to get to a solution/distraction/reconciliation.

Most days are on the sunny and fun side, despite being filled with huge struggles and/or overwhelming joy. We have plenty of minor issues and blissful connection through simple grins, giggles, and snuggles. We have daily battles over holding hands in the parking lot, me being allowed to go use a bathroom (all the time, thanks third pregnancy), or wear a hair tie. We have glorious bike rides, read endless Curious George stories, and bond over building “big, huge [Lego] trucks”.

Most importantly, I have a stellar eating buddy (until this baby gets so big that I have no room for food any more).

It happened in the backyard, where there really is not enough room to ride scooters. The kids made a course anyway: up and down a strip of concrete between the house and lawn, then a loop around the patio perimeter – skirting the table and chairs, the BBQ, the playhouse, and me (barely).

It happened in one single, unplanned moment. After six months of insistently pushing his scooter backward, Owen turned it around and finally rode the damn thing. Like a pro.

Addie – who never misses a detail of someone else’s life, yet remains unaware that her shirt is tucked into her underwear on the regular – noticed it first. “Owen’s riding his scooter the right way! Good job, bud!”

With his left foot on the scooter, right foot poised to push off the concrete, and toddler sausage fingers gripping both handles, he went for it. He became pure concentration: lips pressed together, eyebrows knitted, staring straight ahead. But his eyes revealed wild joy, recognition of fun, and a look that said: get some.

I truly thought he would never do it. I was about to put the scooter in storage, to avoid the frustration every time we tried it. This was the progression: after hours of Owen begging: “Scoo’ ride! Scoo’ ride!”, and then talking Addie the hermit into going too, we would set out. Along the way, I would casually suggest trying to ride forward and he would shake his head with a quick, firm, “mmm mmm”. No way – not interested in your conventional scooter ways.

Owen always had a predetermined route; at every turn, there was only one acceptable way to go. The problem was, we had to make our way home eventually and those 13-inchlegs max out at around seven blocks. Inevitably, we would end up too far away, tired, thirsty, and disgruntled. After bribes and reasoning failed to turn him around the right corner, I would end up carrying both the screaming boy and the scooter. Meanwhile keeping the tired girl from riding into traffic or stopping altogether.  And, often, pushing the baby in the stroller. While pregnant. 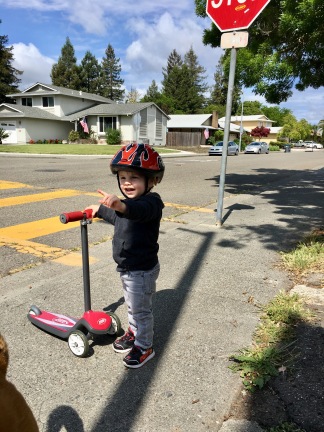 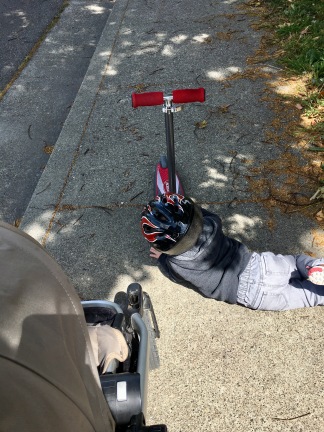 Like I said, I was one failed ride from putting the scooter away for good. My kids always know when they have pushed an obnoxious phase to the absolute limit, though.

We seized the moment, on that first day he rode around the backyard course, and set out immediately for a neighborhood ride. After a quick thirty-six minutes of sneakers, sunscreen, and helmets (Addie’s with flowers and Owen’s with flames) we were on our way.

I could not judge who of the four of us was more proud on that first scooter ride: me, Kevin (who we passed working in the yard on our way out), Owen, or big sister. We made our way to the high school near us, with a big open blacktop for lots of practice.

Pushing off with his right foot he could not immediately get a stride or momentum.  His foot stayed up too long, knee bent behind him as though it knew it had just accomplished greatness and was trying not to blow it with more movement. Or else his foot went back to the ground too quickly, stopping forward motion.

His first big success came when he found a nice little slope leading away from the school’s gym. The kid has always loved a low ramp on foot. On wheels, it was just enough to get him a little speed without scaring him.

From that first trip out, he was riding along as though he had always been able to and was merely waiting for the moment he felt like it. Going from not-scooter to scooter happened for him in an instant, much like walking. There was a long time of not doing or visibly trying, and then suddenly charging ahead with little fumbling.

I feel pride swell outside of my body when I get to witness him master these milestones, so undeterred by difficulty. He knows exactly what he wants and is willing to put in the work for it. I admire (and envy) his beauty, determination, focus, excitement and then pride.

He’ll learn, like Addie did, how to balance and steer and other technicalities. He’ll find a whole new thrill when he gets some speed. He’ll eventually get over the stubborn need to go whichever way he wants at every turn (or maybe not – but we have lots of M&M’s). He’ll become overconfident, like Addie is now, and try fancy tricks that lead to skinned knees and tears. He’ll find only bigger and steeper ramps from here on out.

Hopefully I can curb my anxiety as I watch it all unfold, remember my pride and his joy first, and give him the freedom to take risks. With any luck, our emergency room visits will be infrequent.